Some of the things my mom likes to watch on TV are stupid celebrity gossip shows that come on after the nightly news. I disparage her whenever I see her doing this, telling her that it is unbecoming of someone on her level of intellect.

Nevertheless, as mind-numbingly idiotic as these shows are, they do offer the astute observer of social dynamics a glimpse into how mainstream society, particularly women, feel about the world. They can give insights into the direction of our culture, ever-obedient to overexposed media darlings.

One thing I notice about these shows is the slow yet steady praise of the fat acceptance movement (if indirectly). Of course, we can see this without watching these silly shows. We need look no further than Kate Upton being pushed as the hottest chick on earth. She isn't fat by any means, but she is vastly overrated in terms of her looks, and by the standards of her profession, she is a bit on the heavy side. Nevertheless, she is being pushed- hard, by the media, and has two Sports Illustrated swimsuit covers to her name, among other accomplishments. Kate Upton, they say, is a sign of the times. She is a sign that the tyranny of thinness is coming to an end, and "healthier weights" (beware of this term, more on that later) are becoming seen as more acceptable and beautiful. 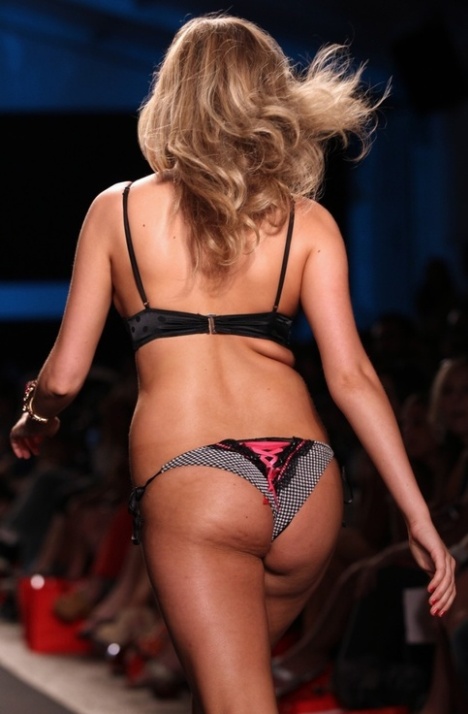 We can go back further than Kate Upton, though. Christina Hendricks of Mad Men fame is probably just as influential in pushing the fat acceptance movement in the popular mind. Here was a "natural beauty" that everyone was raving about.

Again, just to make myself clear, I am not saying that these women are fat or unattractive. I am simply saying that they are being used as Trojan Horses by the fat acceptance movement to gain more access to mainstream society, helped by the media.

Indeed, if the impetus of this latest media movement were to stop at Kate Upton and Christina Hendricks, I wouldn't mind too much. You can still look decent without being a size two. Lingerie model bodies are not attainable by everyone, and women should not feel ashamed or ugly simply because they can't look like a Victoria's Secret Angel. Men too, shouldn't feel bad if they can't be on the cover of Flex (I certainly can't, and I don't).

Unfortunately, this is not where this media push and certainly not where the fat acceptance movement it is fostering (perhaps unwittingly) stops. It instead wishes to promote fat women as being beautiful, and eliminate traditional standards of beauty as being the result of 'thin privilege.' Like all leftist ideologies that are the legacy of the Frankfurt School, it gives primacy to feelings rather than facts, and is therefore socially destructive. Fat acceptance is unacceptable, for a variety of reasons:

A major platform of the fat acceptance movement is the idea that beauty can be found in all body types. The preference for thin women (or men) is a socially constructed privilege that is to the detriment of 'people of size.' Waist to hip ratio among women (and to a lesser extent, men) is one of those things. While the exact preference for this too varies, a median female WHR of around 0.7 is more or less universally preferred. Even experiments that suggested that this was not the case were later shown to be flawed. A WHR varying around 0.7 among women is famously associated with higher levels of estrogen and thus fertility. Naturally, this would be more attractive to men. In addition to fertility levels, WHR of around 0.7 in women and 0.9 in men has been significantly correlated with greater physical health and life expectancy, such as less risk of heart disease, for example.

Fat people naturally tend to have high WHRs. This signals that they are both unhealthy and consequently, unattractive. This leads me into the next reason why fat acceptance is unacceptable...

2. It is a "You Can Have It All" mentality that disincentivizes meaningful self-improvement.

If you see yourself as unattractive, you will consequently try and do what you can to become more attractive (unless you're total loser). This usually means going to the gym, changing your diet, and putting a greater emphasis on fashion and grooming. All of these things require varying amounts of dedication. While our attractiveness is certainly limited by our genetics, there are also environmental factors that are within our control. If we are wise, we will maximize these factors to the best of our ability.

The fat acceptance movement is a cop-out from this. It erroneously tells its adherents that "you are beautiful just the way you are," despite that statement being patently false. More than that however, it allows the adherent to rationalize not working to improve her (or his) attractiveness by actually putting in the effort to do so. You don't need to go to the gym. You don't need to eat better foods. You don't need to dress and groom yourself to perfection. After all, you are beautiful just the way you are, and those things are products of thin privilege. What is the incentive? The ultimate mentality of this movement is that you can be beautiful despite not being blessed by good genes or by putting in the hard work to make yourself so. It is no wonder that this philosophy is so seductive to some, especially those that have been given the short end of the stick, but it is a Judas- an empty promise that will betray its adherents to lives of disappointment and anger.

3. It excuses unhealthy lifestyles, which negatively impact the entire population.

As mentioned before, overweight people are unhealthy (or at least not as healthy as they can be). I do not need to mention how big a problem obesity is in the United States. The U.S. is the most overweight country in the world, and it not only negatively effects our average life expectancy, but it drains billions of dollars out of our economy every year and makes healthcare more expensive. This punishes people that actually did the right things by forcing them to pay for people doing the wrong things. And it allows people, lured in by false promises and exaggerated claims, to rationalize continuing to be unhealthy. Despite proponents pushing "health at every size", this pitiful scheme has been heavily (no pun intended) criticized by doctors as promoting bad health and lifestyle habits while relying on flawed methodology. The bottom line is, that even if you are fit, being overweight, or especially obese, is never a positive for overall health. It puts the person who desires to be "healthy at any size" behind the 8-ball from the start. It is a false promise, or even outright fraud, and must be labeled as such.

4. It excuses the insane food policy of the U.S. government.

There is a very real reason why the U.S. is so overweight. Despite what people say about lack of exercise (which is true), by far the biggest reason Americans are the most overweight population in the world are horrendous eating habits. Due to a glaringly redistributive system of subsidies and regulations (particularly those that favor corn farmers), the U.S. grows more food than it needs supplied by large scale and subsidized factory farms.

The system in place makes unhealthy corn-syrup laden foods dirt cheap and abundant, while healthy, natural, unprocessed food with ingredients you can actually pronounce is expensive and far harder to find. Given this market, it is no wonder why so many people have terrible diets and why they are consequently unhealthy! This is why I can only smirk and shake my head in mockery at attempts by states and municipalities to curb obesity- usually in the forms of taxes or, in the case of my city's dictator-mayor, an attempted ban on soft drinks that was rightly thrown out by a court as being arbitrary. The states and localities can try all they like, but as long as the current system of agricultural subsidies and regulations that favor companies like Monsanto remain in place, such further regulation will continue to only be a frivolous added burden.

And this is the fourth reason why fat acceptance is unacceptable. By disincentivizing weight loss and by promoting fatness as something other than unhealthy and unattractive, it turns a blind eye to this unfair and anticompetitive agricultural system fostered by the federal government. It makes it something more than unacceptable. This system ought to be opposed, and far more loudly than it currently is, otherwise Americans will continue to be doomed to obesity in very large numbers. Fat acceptance enables this crime against the people of this nation, and it is therefore ethically reprehensible.

Fat acceptance is a rising tide. Turning back to where this article began, the stupid gossip shows have begun describing women that were clearly unattractive and unhealthily overweight as being "plus size," "curvy," or "healthy." In a 1984-style attempt to control language, the fat acceptance movement is trying to rewrite our definitions in an attempt to re-label fatness as a positive. It is a classic Cultural Marxist attempt to force the transformation of society to make up for personal failings and insecurities. It is simply yet another cultural appeal to the lowest common denominator. Do not fall into this trap. Call this behavior out whenever you see it. They will undoubtedly try to guilt-trip and play the victim card. Do not let them.

Remember the frame that destroys leftist movements such as this: that people are not entitled to respect, wealth, love, being beautiful, or praise. When you realize this, the rug is irrevocably pulled out from under their feet. As a friend of mine said: people should be treated the way they DESERVE to be treated. People that push fat acceptance, despite the many harmful flaws of this philosophy, do not deserve respect. Tell them the one simple truth of the matter:

J C
I'm a renaissance man with a wide range of interests.